The Eighth Guest and other Muzaffar Jang Mysteries - Madhulika Liddle
fiftyfiftyme category: Other 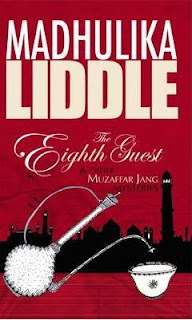 The second in Madhulika Liddle's series of Muzaffar Jang books, this is a collection of short, self-contained mystery stories.

I really enjoyed The Englishman's Cameo, Muzzafar's debut appearance, and the follow-up did not disappoint. Setting a detective in Mughal India, specifically Shahjahan's Dilli,  makes for very entertaining and informative leisure reading. The Eighth Guest  is an undemanding anthology, but manages to inform at the same time as it entertains. It's clear that the author, herself a Dilliwali,  has done a great deal of research to recreate her chosen setting as carefully and accurately as possible, and that is reflected in the many fascinating historical tidbits woven into each story. The politics and mores of the time are treated without the baggage of 21st-century interpretation that would be found in a non-fiction historical study. They are simply presented as they are, part of the fabric of the stories. Also, having a detective working in 16th-Century Dilli means that there is no scientific wizardry available for solving the mysteries (not all are crimes) and that makes a refreshing change for those of us who enjoy the old notion of a cerebral detective.

The stories in this collection take place after The Englishman's Cameo, but none of them are dependent on having read that book first. I would recommend this book to anyone who enjoys mystery novels, especially historical detectives of the Ellis Peters/Elizabeth Peters style, and to those who want a fun way to learn a little more about Mughal India.

In summary, a light, entertaining read that also offers fascinating glimpses into the world in which it's set. My personal favourite is The Bequeathed Garden, which has left me longing for a nice illuminated copy of the Gulistan of Sa'adi.
Posted by Unknown at 18:30