Book 03/50 A House Divided: The History of Hindi/Hindavi 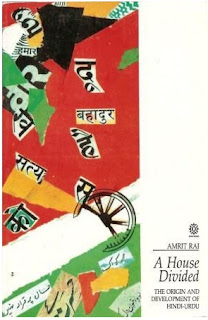 The copy of this book I read was from its original 1985 publication, with "Hindavi" in the title, where the revised edition (pictured) has "Urdu". I've been told that, other than the title, not much was changed between the two editions.

Hindi/Urdu is possibly the most famous, and certainly the most widely used, digraphia in the world today. This book is an attempt to trace the language from its roots up to about the time of Partition, with a focus on when and how one language began to split into two forms that are increasingly presented as being separate entities. It's a challenging task, because the status of Hindi and Urdu is one that is fraught with issues of politics, nationalism and religion, and those factors make a purely linguistic assessment difficult. An example of this can be seen in Ostler's  The Empires of the World wherein he has a graph listing the 20 most spoken languages today and places Hindi 3rd with 498M speakers and Urdu 12th with 104M, then over the very next page says of them "Hindi and Urdu are in a dialect continuum if they are distinct at all."

That sort of uncertainty about how to define them is at the heart of Rai's book, and the external factors that have caused the confusion are very clearly evident throughout. In the end, they give this book two distinct tones, one of which I did not enjoy, although I could understand its rationale.

For me, this book is most enjoyable in the early chapters, establishing the steps in the process that led from Vedic and Sanskrit through various Prakrits to the New Indo-Aryan languages, including Hindi-Urdu. Right from the outset, though, the author is focused on the issue of when, how and why Hindi and Urdu became separated from each other.

Rai documents all his claims with copious examples, and the linguistic scholarship seems sound enough. It was fascinating to see the the markers of linguistic change down through the centuries, and whenever the book is addressing solely linguistic issues, it is very enjoyable.

Of course, the very title of the book shows that the author's intent is to go beyond linguistics. The whole book addresses claims made about the history and origin of Urdu made by scholars of Urdu, and details the start of the divergence between Hindi and Urdu, and the reasons for that divergence, including the various campaigns deliberately aimed at fostering the separation. As linguistic history it is fascinating, even if the socio-political factors make for very  depressing reading.

Unfortunately, despite a generally even-handed tone, toward the very end, the book falters. The book makes no attempt to look at efforts to separate Hindi from Urdu, the drive for Sanskritisation and "shuddh" Hindi. Given the detailed analysis of the efforts to Persianise Urdu, this omission implies that the divergence is all the "fault" of one side, as it were.

That aside, there was a wealth of interesting reading in the book, especially many interesting quotes on the nature of languages and their inevitable evolution from scholars, poets and linguists down through the centuries.
It was naive of me to think that a book about this digraphia could be totally objective, I think. Overall, it is a good read for those interested in the history of Hindustani. To its credit it will, at least in places, likely annoy extremists on both sides of the argument. It is, though, a little disappointing that, driven by a desire to address errors and omissions in the propagandists' history of their language from the extreme Urdu end of the continuum, he falters at the very end and effectively gives a free pass to their counterparts at the opposite end.

I have no side in the political or nationalist debates that use the differences between Hindi and Urdu as ammunition. I really look forward to any comments, but I'm not getting into "it's their fault", "no it's theirs".  My interest in this is linguistic, fascination with the fact of a digraphia  which despite concerted, systematic efforts at differentiation by promoters on both sides of the divide remains mutually intelligible at street level. To me, this represents a triumph of language as an intrinsic part of human nature over the superficial and temporary overlays of politics, religion and national identity. Namaskaar, salaam alaikum.