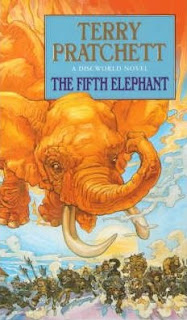 The fifth in the City Watch series, The Fifth Elephant was a welcome return to Pratchett at his best for me. Witty, amusing and wryly observant, it was a great fun read.

In keeping with the old adage about a diplomat being an honest man sent abroad to lie for his country, the story revolves around Commander Sam Vines of the City Watch being sent as ambassador to Uberwald to attend the coronation of the new dwarf  Low King. What follows is a story of political intrigue and family politics that I found very hard to put down.

Because his girlfriend, Sergeant Angua, is from Uberwald and has left to go back there suddenly, Captain Carrot resigns from the City Watch and follows her. This sets up an amusing subplot about what happens to the Watch with both Vimes and Carrot away.

As with all the best of his work, The Fifth Elephant takes shots at many different elements of society. Primarily politics and diplomacy, but also the nature of an aristocracy and the significance of tradition and ritual. It does all this while still being very funny, and weaving in a relatively complex detective story for Vimes to figure out. It was also the first Discworld novel of the twenty-four I've read that featured a truly evil character, the genuinely psychopathic Wolfgang, Angua's brother. Pratchett wrote this character very well, as truly a bad seed, and his unrelenting malice added tension to the storyline.

Ultimately, though, I read Pratchett for amusement, and  The Fifth Elephant  provided that aplenty. Thanks to the irrepressible Gaspode, I now have another phrase to remember for describing hopeless situations: all the survival chances of a chocolate kettle on a very hot stove.  After the stodgy dreariness of Carpe Jugulum, Pratchett certainly melted away my disappointment with The Fifth Elephant, earning my enthusiastic recommendation.
Posted by Unknown at 23:04