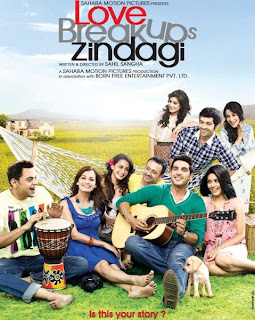 My last post for the fiftyfiftyme challenge was a defence of  Agent Vinod, a movie widely panned as a feeble ripoff of Western action films. This post is about another film that gets trashed, mostly because of deeply held antipathy toward its leads. Defending two such films in a row makes me wonder whether I should rename my blog The Hunting of the Snark.

In her blog Shahrukh Is Love (if you’re not reading it, you really, really should be) my vastly more knowledgeable filmi fellow Kiwi used the phrase “marvellously mediocre” to sum up a film she watched recently. The phrase fits Love Breakups Zindagi so well I just had to steal it, thank you Vanessa!

This film is widely dismissed as awful, largely because of starring Zayed Khan, and those who don’t condemn the film for his presence write it off for having Diya Mirza in it. I don’t have the sort of visceral hatred of Zayed that seems to be almost universal among the filmi bloggers I follow, so I started watching Love Breakups Zindagi without any expectations, negative or positive. In the end, I was happy to have watched it.

Perhaps the most striking thing about this film for me was that it seems to suffer from the curse of the first half. Many Bollywood films start off strong, then disintegrate into amorphous messes after the interval. With this film, I felt that it only found its structure and purpose in the second half. The first half of the film seemed to have consisted of approximately ten minutes of dialogue scattered between more songs than I could be bothered to count.

The film starts brightly, introducing the two main couples quite cleverly, during an opening song. Once the little mini twist in the opening setup is revealed, it becomes instantly clear who ends up with whom, the only question is how they get there. I struggled with the first half because it seemed that it was usings songs as exposition, and none were particularly memorable, but the 2nd half developed very nicely, and transformed my overall opinion of the film. I was impressed with the way they resolved the love triangle by humanising the loser, not demonising him.He bowed out in a low-key version of the classic filmi sacrifice that was still in keeping with his character and thus believable.

Zayed and Diya have setup a production company together, and perhaps it’s that familiarity that allows them to come across as likeable and believable couple on screen.  I certainly don’t get the amount of antipathy directed toward them as people, especially Zayed.

Even though Zayed and Mirza were the lead “couple” in the film, the real strength of the film, and the element that raised it above merely mainstream mediocrity was the Govind and Sheila storyline. It was very refreshing to see a cookie-cutter Bollywood film include a mature romantic relationship between a twice-divorced man and an older woman, and I was impressed by both Cyrus and Tisca in their performances. I am very much looking forward to watching Firaaq again to see more of Tisca.

The movie also had lyrics by Javed Akhtar, as in this song, my wife's favourite from the film


and a delightful cameo by his wife – my shocked amusement  at seeing Shabana-ji in such an ephemeral  film was profound. In fact, the cameos were a real highlight of the film. Boman Irani was excellent as the gun-toting Dad, Shah Rukh was entertaining as himself and the unfailingly excellent Farida Jalal endeared herself to me even more by speaking Panjabi in a manner that was (in my experience)  inauthentically slow and well-enunciated, enabling me to follow every word of it!

Every filmi fan develops their own idiosyncratic likes and dislikes, my own  rants against Black, Baghban, Devdas and KANK  are good examples of this. That's why an outside perspective can be useful at times. My  sapnon ki rani doesn't watch many Indian films with me, but when she does, she often says things that make me smile. Like me, she found Love Breakups Zindagi a pleasant enough timepass, but it was her reaction to seeing Zayed that was most refreshing. She said, "Wasn't he in Main Hoon Na?? I like him."  That made me smile, reflecting on how very seldom anyone ever says that about him.

In summary, I would say that Love Breakups Zindagi really is marvellously mediocre. None of the performances are terrible, and none are histrionic genius. It is a good-natured film, one that seems grounded both in its depiction of the world in which it set and in its own perception of itself. Unless predisposed by personal antipathy toward the leads, there is nothing here to generate active dislike, and the film's makers deserve credit for the Govind and Sheila storyline in particular.The film knew it was filmi but it still felt quietly real. In an industry that cranks out hundreds of films a year, some films will be outstandingly good and some will be staggeringly bad. Many will be  mediocre, some marvellously so, and describing Love Breakups Zindagi as one of them is not a criticism. It would be very easy to do a lot worse, as I found out with the next film I watched.
Posted by Unknown at 12:20