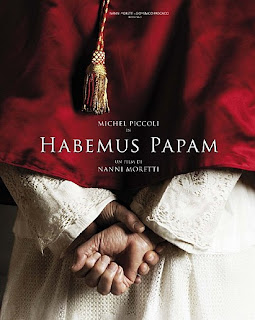 Mi piace moltissimo la lingua Italiana - la più bellissima lingua del tutto mondo. It wasn't the first non-native language I learned, and  I haven't used it in nearly ten years, but it remains my first love. Craving the sound of Italian, I tried to watch Ladri Di Biciclette last week, but not even the allure of the language could get me through that relentlessly heartbreaking film. Feeling like I owed my beloved Italian an apology for such faithlessness, I turned to a movie about faithlessness, in a way.

I went into Habemus Papam looking for  comedy, and found it, but I got so much more than just that. The movie had plenty of genuinely amusing scenes, and several that induced outright laughter, but it was no easy comic romp. I normally ignore the "reviews" snippets used in posters and promotional work, but one for this movie was right on the money: "Tender, Funny and Timely". Habemus Papam really is all those things.

It's tender in its examination of a personal crisis. I was expecting it to be a satirical and amusingly cynical skewering of the politics and machinations that must be integral to the selection of a Pope. Instead, the film took a surprisingly gentle and understanding tone, highlighting the alienness of the world in which the Cardinals live. Elderly men, isolated from the world, and  from those they lead, this film did a great job of being sympathetic, and showing them as human, focusing on their likeable sides.

Nanni Moretti not only did a fine job directing the film, but his performance as  "the best" psychoanalyst who finds himself suddenly held hostage after taking on the ultimate prestige client, was pitch perfect. A non-believer who was neither cowed by the Church, nor aggressive toward its representatives, he delivered a very nuanced performance. Perhaps one of the highlights for me, apart from the wonderful volleyball match, was his use of the Bible to argue for the validity of his profession and purpose. It was respectful of his audience and their beliefs, while still being  an uncompromising defence of his own values.

When I read the synopsis for this film, I couldn't help thinking of Albino Luciano, who became John Paul I. In the photos of him, and in the glowing descriptions of him in David Yallop's In God's Name, I get a sense of the same sort of slightly lost, bewildered gentleness that Michel Piccoli does such a great job of displaying as Melville. To see him as an old man in street clothes, wandering through Rome looking for himself was a powerful reminder that, whatever one's views of the Church, in the end its rulers are neither angels nor demons, just men.

The real stunning highlight of the film for me was the end. I did not see that coming. Too many years of Hollywood's addiction to neat tidy climaxes perhaps, this film's ending was a stunner. It was also absolutely perfect. More than just the action of the climax, the reactions to it were authentic and moving, and again portrayed the Cardinals in a very sympathetic way. It was an apt summary of the film as whole that neither savagely derided the Church nor fawningly idolised it, but did resolutely focus on the good in its characters.

I can't think of a single thing I didn't enjoy about this film. I was even stunned and delighted to realise that I could follow it OK without subtitles, a huge shock after so long. It has filled me with anticipation for seeing more of Moretti's work, and made me realise that I have to somehow find the time to revive my Italian. If you haven't seen it yet, all I can say is, perché no?
Posted by Unknown at 00:27