Book 05/50 Through the Language Glass 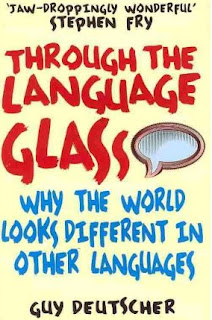 I simply cannot recommend this book strongly enough. Deutscher's The Unfolding of Language is one of my favourite books, and Through the Language Glass  is an excellent companion to that earlier work. I'm so very pleased that I overcame my initial hesitation and bought it.

The hesitation was caused by the subtitle. That phrase "why the world looks different in other languages" instantly made me think of Sapir-Whorf, and I was loathe to read anything that promoted such a theory. I need not have worried. Rather than defend the indefensible, Deutscher instead looks for a middle path between two extremes in the argument about whether nature or culture governs our perception of the world in which we live.

The book focuses primarily on colour - specifically how different colours are labelled in different languages and whether those labels actually impact on the way colour is perceived by the speakers of those languages. Other examples considered involve gender (whether "masculine and "feminine" gender labels affect the way the items thus categorised are perceived) and direction (egocentric versus geographic). It's a fun journey that starts with Homer and travels throughout history and around the world, from Russia to Mexico, from Native Americans to the small Aboriginal tribe that gave the world "kangaroo".

One note of caution: I prefer reading on my Kindle these days, but this book must be read in a traditional book format. The Kindle version apparently doesn't have many of the illustrations and graphical elements that are fundamental to the arguments made, so stick to the dead-tree versions!

The contention that language does govern perception, even partially, is very contentious, and rightly so. Deutscher treads carefully and reasonably, and lays out his arguments with meticulous care. He is challenging an orthodoxy, but does so in a specific and limited way, and makes a compelling case.

Deutscher's gift is being able to write about a field often thought of as dry and uninteresting and bring it to life. He writes with verve and real humour, and a complete lack of academic preciousness. I was surprised at how many times I laughed out loud at phrases in the book, and his humility was endearing. There was no insistence that he had all the answers, or even any of them, just a thought-provoking series of arguments that suggested there are  many questions that need to be addressed. That he ends the book with a chapter entitled "Forgive Us Our Ignorances" is an excellent example of how honest and unassuming the book is.

I enjoy reading about linguistics as a hobby, and Deutscher's books are written for people like me. It's clear that he loves language, and celebrates it in his research and writing. If you want to learn more about the incredibly complex relationship between our words and our worlds, or want to wonder what we mean when we ask, "why is the sky blue?", this book is a must read.