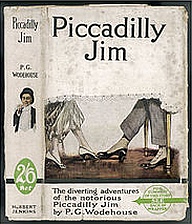 "If Wodehouse hadn't existed, it would have been necessary to have invented him."


Voltaire may not have said that, but I'm sure he would have done, given the chance. After wading through a fatiguingly mediocre Sapne Sajan Ke, I was desperately in need of refreshment, and the chance to return to Wodehouse was a blessing.


Wodehouse's writing is like a soufflé, light, insubstantial and airy, and guaranteed to bring a smile to the face of anyone who enjoys a sweet treat. Despite having read many of his books, including almost all the Blandings books, and most of the Wooster/Pelicans stories, I'd forgotten that I even had Piccadilly Jim until reminded of it by Dustedoff's excellent review review of the 1936 movie adaptation. Having "discovered" it, it's now one of my favourites, almost the quintessential Wodehouse.

One of the reasons that Wodehouse does generally not translate well to the screen is that his trademark style is not in the narrative, but in the descriptive parts of his works. An oft-quoted example of this is "if not actually disgruntled, he was far from being gruntled." Or, one of my favourites from this book, "it was his tendency, when he found himself in a sea of troubles, to float plaintively, not to take arms against it. To pick up the slings and arrows of outrageous fortune and fling them back was not a habit of his." Phrases like that can't be brought to life onscreen, but they are what makes Wodehouse Wodehouse. So too are ridiculously complex and contrived plots, the sheer silliness of which make not smiling at them an impossibility. Even by Wodehouse's high standards, though, the farcical intricacy of the plot in Piccadilly Jim takes some beating.


Reading a Wodehouse story is liking pulling on a comfortable pair of slippers, you know exactly what you're getting into. True love will conquer all, but only after twists and turns that would make the Minotaur's head spin, and only after defeating women who make the Minotaur seem like a pussycat. In Piccadilly Jim the twists and turns include the delightful bonus of the lead character and hero of the story having to impersonate himself, a twist I don't recall from other PGW stories, and one that made me laugh out loud when I saw it coming.

In a world full of political darkness, economic uncertainties, and various grim horrors, it's therapeutic to turn the clock back a hundred years and just laugh. Wodehouse at his best is a master laugh maker, and  Piccadilly Jim is Wodehouse at his best. If you haven't read it, do, and if you have, return to it when you need to rediscover your smile. I guarantee that reading Piccadilly Jim will leave you thoroughly gruntled.
Posted by Unknown at 17:14