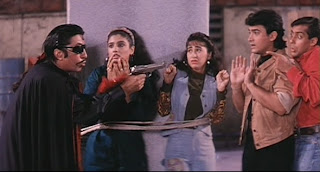 This film scrapes under the fiftyfiftyme challenge "no rewatch" rule by virtue of the fact that I never actually finished watching it the first time. I disliked it so intensely, I gave up  barely halfway through. Having now seen it all, the question that remains is: What on Earth was wrong with me then?!

Andaz Apna Apna is normally translated "To each his own style", or similarly. That's a nice summary of the film's strengths and weaknesses. All interaction with art is subjective, but perhaps comedy most especially so, and film comedy from a culture not one's own even more so. That's the weakness, the possibility that what seems hilarious to many will leave others unmoved. The humour of Andaz Apna Apna is so non-stop that if it's not  your style of humour, the movie will seem very long and excruciatingly unfunny. Now on to the film's real strength, which centres on one word - meta.

Ben Zimmer wrote an excellent piece on the  evolution of meta recently, and the word in its current sense is very relevant to this film. It's a Hindi film that's all about Hindi film, but it has something that most Hollywood attempts at self-referential humour lack - innocence. There is no shortage of Hollywood product that relies on making references to other Hollywood product, but almost all of it is done with a very self-aware sort of arrogance - "look at us, we're making a clever reference here, aren't we clever?" This is done to be "ironic", because Hollywood is far too grown-up to break the fourth wall just for pure, innocent fun. The only exceptions I can think of to this both involve desis, interestingly enough - Danny Pudi's outstanding Abed on Community, and Psych , one of whose producers and writers is a desi American. It's tempting to think that this may not be coincidental, but perhaps indicative of a cultural difference.

The best Indian films really do have a unique innocence to their meta moments, devoid of the clumsily unsubtle "nudge nudge, wink, wink" mentality of shows like Family Guy.  The filmi references in Andaz Apna Apna are perfect illustrations of this. They are genuinely funny because the laughter is unforced. There's no script equivalent of a neon sign saying "laugh now", just a relaxed confidence that the audience will find them funny because the writers did - a shared laugh among friends who get the joke. And in this film, there's two and half hours of that shared laughing. Every filmi trope is thrown into the pot, including the clownish "supervillain" as in the above screenshot, but they are laughed with not at.

This unaffected innocence makes Andaz Apna Apna  a relaxing, fun movie to watch. Its simplicity and lack of pretense is sadly rare even in Hindi films today, more and more of which seem to feel obliged to ape Hollywood in everything, including attitudes toward self-referentiality. This film may represent the acme of filmi meta-humour partly as an accident of timing, coming as it did toward the end of that age of innocence.

The fact that I enjoyed this film so very much got me wondering why I hated it the first time I tried to watch it, and the answers I came up with are the reasons why I can't give it an unqualified recommendation.

When I wrote about my favourite Hind film ever, Pyaasa, I said that to do the film any sort of justice required learning at least some Hindi/Urdu. I think that is even more true of Andaz Apna Apna, for a slightly different reason. In Pyaasa, the poetry of the songs will go un(der)appreciated without at least some grasp of the language. In Andaz Apna Apna the sheer speed of the dialogue can make listening to it without any comprehension tiresome - nearly one hundred and fifty minutes of people jabbering away flat out, just an irritating noise. That's one of my lingering memories of my first abortive attempt to watch it. It's a shame, because the quality of the subtitles is pretty good by Bollywood standards, and the basic humour of the story is of broad appeal. Perhaps I would still have laughed at it the first time if I'd just turned down the volume a bit more.

The other thing that makes me think this would not be a great film for a novitiate Hindi film watcher is its meta-ness. In-jokes are only funny if you're in on the joke, and there are so many in this film that if none are known, much of the humour is lost. For example, one of my favourite laughs in the movie is this one:

The subtitles do a perfect job of translating the song lyrics, but the scene is not funny at all if the reference to Qayamat Se Qayamat Tak is missed. I got it, and laughed a lot. I did that often enough through the film to know that there must be many more jokes that I missed. But that's OK, because I got enough of them to find the movie very funny and because I can look forward to finding ever more scenes to laugh at as my knowledge of Hindi cinema grows. It might be possible for someone to find this film mildly amusing without knowing anything of the language or the filmi references, (like Karisma playing someone who may or may not be Karisma), but its status as a truly iconic barrel of Hindi belly laughs will almost certainly remain puzzling.

To each his own may be a cliché, but Andaz Apna Apna  is one of the funniest collections of clichés you'll ever see. If you haven't seen it, do, and if you don't find it funny the first time, watch a few hundred more Hindi films and then try again. It worked for me!
Posted by Unknown at 11:18