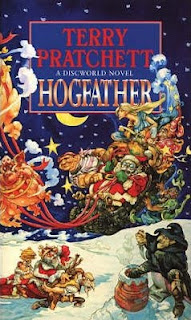 What a difference a day makes. Having finished Terry Pratchett's nineteenth book,  Feet of Clay on one day and and feeling underwhelmed, I turned to his twentieth the next day and was left grinning from ear to ear. Hogfather is everything a Discworld novel should be.

After the political preaching of Feet of Clay, in Hogfather Pratchett returned to his most productive territory - the role of belief in human society. This is the same topic he explored so brilliantly in my favourite of his so far,  Small Gods. That book is the best of his I've read, but it's not the funniest. In all the books which have DEATH as a central character, Pratchett is at his humorous best, and Hogfather had me laughing out loud a lot.

There is a difference between the DEATH books and the Watch books, and I think the big difference is attitude.  In the Watch series, Pratchett's target is politics, and the strength of his own political views often invest his writing with palpable anger. This was particularly noticeable in Feet of Clay, and it's clearly not easy to be flippant when angry. The DEATH books, on the other hand, have belief as their target, and they are written in a spirit of amused affection. There is so much absurdity in belief systems that they are a rich source of comic material, and Pratchett exploits that material well, with the affectionate attitude of someone who includes himself and his own belief system in the fun, rather than someone trying to preach through comedy,  as in his more political works.

Everything about Hogfather shows Pratchett at his best. All the main characters are well drawn, including the psychopathic Mr Teatime and the bureaucratic bad guys, The Auditors. The star of this book, though, is the wonderful Susan Sto-Helit, DEATH's granddaughter. I saw the TV adaptation of this book long before reading it, so I visualised the wonderful performance of Michelle Dockery as I read the book. Susan's struggle to come to terms with her family background is a big part of the stories she's in, and provides plenty of opportunities for amusing swipes at other famous characters, as in "She'd become a governess. It was one of the few jobs a known lady could do. And she'd taken to it well. She'd sworn that if she did indeed ever find herself dancing on rooftops with chimney sweeps she'd beat herself to death with her own umbrella."

Mary Poppins is not the only source of laughs in Hogfather, though. Around the central framework of an affectionate parody of Christmas, Pratchett managed to make me laugh out loud with digs at Hans Christian Andersen's predisposition for needlessly cruel, sad endings (the little match girl) to restaurant French - Mousse de la Boue dans une Panier de la Pâte de Chaussures, anyone?

Everybody believes something, which is what makes Pratchett's best work so universal. Anyone who can laugh at themselves should enjoy Hogfather, a good-natured celebration of the wondrous silliness that is the human imagination and the importance of its capacity for belief. This is a Discworld novel I can enthusiastically recommend to anyone who hasn't read one before, with one important warning: Reading it late at night may disturb the sleep of others in nearby rooms, try to keep your laughter down!
Posted by Unknown at 09:09