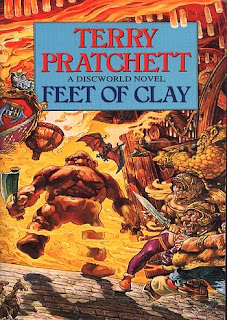 One of the reasons I decided to do the fiftyfifty.me challenge was to prod me to get back into my reading of Terry Pratchett's books. I  read the first eighteen in three months  before series saturation set in, and the challenge has provided the incentive to read the other twenty or so, after a gap of a year. First on the list, book number 19, Feet of Clay.


Like a Wodehouse story, a Discworld novel is a known quantity. Pratchett uses his stories to lampoon society on this planet. Sometimes, the mix of commentary and humour is almost perfect, and a gem like Small Gods is the result. At other times, the commentary comes over a little heavy-handed or lumpen, and we get Feet of Clay.


The fourth in the City Watch series, Feet of Clay continues that subseries investigation of politics and society, particularly addressing issues on inclusiveness. The message that everybody is equal is never obscured or buried beneath layers of subtlety in the Watch series, but it comes across in a particularly stodgy fashion in this book. Perhaps that's because the central characters are golems, and like them, the mix of humour and social commentary in this work comes off a little misshapen and half-baked.


The problem seemed to be an excess of earnestness. There is always one key target in a Discworld novel - in my favourite by far (til date) Small Gods, it's religion and religiosity, including the religion of atheism. That book is very, very funny, its mockery works because it's both insightful and delivered with a light touch. In Feet of Clay the target is monarchism, whether absolute or constitutional. Unfortunately, it seems that Pratchett's own views are so strong on this subject that the book becomes a republican rant, rather than a mockery of monarchs and royalists.

That's not to say it was a total failure. Pratchett's strength in humour is not unlike Wodehouse's,  throwaway descriptive asides that at the least raise a smirk, and at their best are genuinely laugh out loud funny. There were several of the quiet smirk moments in this book, not sure if there were any of the laugh out loud ones.


The best thing about this book is the Patrician, Havelock Vetinari. He is the highlight of every Watch story, never used as a mouthpiece for any of Pratchett's preaching, always allowed to be true to his character. His role in this story was central, both to the plot and to redeeming the book's readability. Also, the next book in the Watch series, Jingo is often mentioned as one of Pratchett's best, so another good, strong  story involving Vetinari is something to look forward to.


The overall standard of Pratchett's work is remarkably high, and I have yet to read a bad one. While I would not recommend  Feet of Clay as a starter for anyone looking to get into Pratchett (Small Gods, hands down), it was not without moments of his trademark wit and humour and I'm pleased that I read it so that I can get back on track, and look forward to book twenty, Hogfather. I love DEATH, even in this book, he got one of the best lines. Feet of Clay proved that everyone has them, even Pratchett, but don't let that stop you from visiting Discworld. Have I mentioned how good Small Gods is?