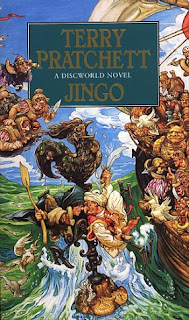 George Bernard Shaw once said, "patriotism is a pernicious, psychopathic form of idiocy", and Einstein asserted that "nationalism is an infantile disease, the measles of humanity". Those two quotes are very dear to me, especially the Shaw, since they express a little something of my depth of feeling about the concept of the nation-state and the absurdity of giving any fealty to it. As pithy and expressive as those quotes are though, they are definitely  not reomtely funny, and that's where Jingo comes in. It pours scorn on nationalism and patriotism and  does so while raising many laughs.


The fifth in the City Watch series, Jingo uses the sudden appearance of an island in between Ankh-Morpork and Klatch as the framework to poke much fun at the ignorance and xenophobia associated with blind patriotism. Much of the book examines the plight of Klatchian immigrants in Ankh-Morpork, "towelheads" who come from a place that's nothing but sand, "invented a number for nothing" and whose cuisine includes vindaloo and korma. This was a clever hybridisation of two immigrant communities prominent, and prominently despised, in Pratchett's England, and offered plenty of opportunities to mock the sheer stupidity of xenophobia.


Of course, what makes the best Discworld books so good is the way they show up Earthly absurdities in order to laugh at them, and Jingo has many laughs. It's by no means an earnest treatise along the lines of "why can't we all just get along?" It is a very funny skewering of the ridiculous human tendency to separate into "us" and "them", on the flimsiest of imagined reasons, and then to be prepared to fight and kill (or, preferably, have others fight and die) over them. The fifteen years since its publication have seen world events and global immigration trends make its message even more topical and universal than when  it was released.

The other thing that makes Jingo so much fun is, again, The Patrician, Havelock Vetinari. The ultimate politician, whose machinations make Machiavelli seem mildly mediocre, Vetinari is always good for a laugh. The City Watch stories can be heavy-handed in their message of equality and tolerance, but Jingo avoids that trap by hovering firmly on the edge of the absurd. By doing so, it shows just how absurd the whole idea of "them" vs "us" is, and how laughably petty the debates really are.

For its handling of a subject very important to me, Jingo  ranks with  Small Gods as one of my favourite Discworld novels. That it is also very, very funny, made the experience of reading it that much more memorable. If you enjoy laughing at human absurdities, you should enjoy this book very much.
Posted by Unknown at 15:19