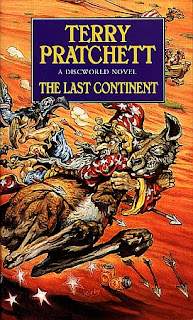 Looking for discussions on Pratchett's best novels, I was surprised at how often the Rincewind series was dismissed as inferior. Because I'm reading all his books in the order of publication, Rincewind was my introduction to Pratchett and still holds a special place in my heart. in The Last Continent, he's back in all his inglorious patheticness, and the results are as funny as ever.


In every Discworld story, the main "target" is pretty obvious, subtlety is not an important part of Pratchett's writing. Nevertheless, in  The Last Continent, the target is so obvious that Pratchett takes the unusual step of writing a disclaimer to state that , and I quote, "this is not a book about Australia". Obviously, he's lying. Everything about EcksEcksEcksEcks is Australia, even the name, and the book is one long joke at that prisoner island's expense. Naturally, that alone should be reason  enough to make the book a favourite of any true Kiwi, but unlike the petty, mean-spirited envy behind most NZ digs at Oz, this book is a celebration. Clearly Pratchett is very fond of Australia and that shows through in all the playful swipes he takes throughout the book. Of course one of the things that helps make Australia what it is is having a whiny, insecure little sibling hanging around craving attention, and Pratchett remembers that. In fact, he doesn't even bother disguising it with a pseudonym as he did with the land of Four Ecks: Since the word is derived from an island that did not exist on the Discworld, the wizards had never heard of a bikini. In any case, what Mrs Whitlow had sewn together out of her dress was a lot more substantial than a bikini. It was more a newzealand - two quite large respectable halves separated by a narrow channel.


Besides being the only mention of Australia's noxiously insecure little neighbour, that passage also highlights the other taget of this book - the Wizards. Occasionally, the depths of my own obtuseness still manage to astound even me, and this was one of those occasions. Perhaps it's because I never attended University that it was only in this, the sixth book in the Rincewind  series, that I finally realised that the Wizards are Dons, and that the Unseen University is, of course, University in the meta, as it were. Happily, that spectacular ignorance on my part did not prevent me from being hugely entertained as always by the incredibly frustrating antics of the Wizards.


In The Last Continent  the Wizards are on a quest to help one of my favourite of all Discworld characters, The Librarian. Their quest ends up intersecting with Rincewind's and along the way, there is barely even one Aussie icon left unscathed. It is to my deep and abiding shame that I must confess to having got only almost all of them when they first appeared. One reference I missed until it was mentioned again near the end. That was truly shameful because the Aussie icon in question is one that most Kiwis have adopted with eagerness and are happy to acknowledge as possibly Australia's only, and certainly its most important, contribution to the advancement of world civilisation - VEGEMITE.

This is not Pratchett mocking the big ideas, like belief, or patriotism, or intolerance. This is Pratchett having fun poking fun at a place he obviously has real affection for, and because of that, it's a great fun read for everyone else, too. If you want to laugh aloud, a lot, as you learn the real story behind "Waltzing Matilda", "Mad Max" and the creation of the duck-billed platypus, you simply must read this book. It’s a fair dinkum corker of a book, cobber, and you’re sure to enjoy it. No worries, mate!