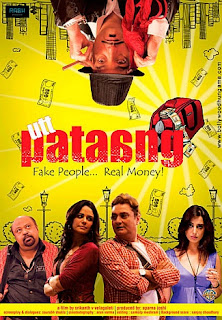 I put this movie on my rental queue shortly after watching Chalo Dilli and Rab Ne Bana Di Jodi and being impressed by Vinay Pathak's performances. I was not  disappointed by Utt Pataang, because I had realistic expectations going into it.
A crime farce with Vinay playing a double role, and told  in flashbacks from each main character’s perspective, it's mildly amusing and competently put together. As the dotty francophile villain Lucky Sardana, his appearance and performance reminded me of a less-threatening Crime Master Gogo, which sums up the spirit of the film. As the "hero", Ram, he's the aamest of aadmi, the sort of role he carries off well, I think. The two female leads both did OK, Mahie Gill had almost nothing to do, and her character's ultimate departure was a flat note in the film,  anticlimactic and unsatisfying, but at least it wasn't a wannabe skin flick like Hate Story.
I really enjoyed Mona Singh's performance as Koyal, and would like to see more of her. I clearly need to rewatch 3 Idiots, because I don't remember her role in that at all. Here she played a low-key central role with a believable quietness, and I hope she gets meatier roles in bigger films in the future. It was a treat to see Murli Sharma turn up, plying his trade as Bollywood's go-to-guy for LEO roles in a slightly humorous setting, with a nice twist at the end.
The star of the show, in terms of its comic impact, was unqestionably Shaurabh Shukla as Nandu, Ram’s private eye best friend. His was the liveliest character and the most grounded, possibly, and the scene where he pretends to be a pizza delivery “boy” was genuinely absurd in a deadpan way, the comic high point of the film for me.
This was a pleasant diversion for a Sunday afternoon. At just over ninety minutes, it was not bloated, and it’s sparing use of songs helped. I was left with the impression that it was a film made by some top flight character actors, getting the chance to have some fun and play leads. For a moderately amusing “crime” comedy, you could do a lot worse.
Posted by Unknown at 15:30