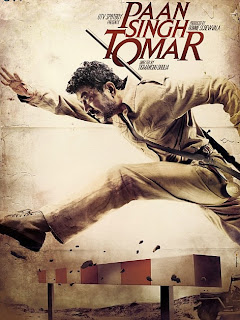 Some movies are quite excellent, others are quietly excellent. Paan Singh Tomar is both. Everything about the movie is understated competence, making for a very satisfying viewing experience.
A biopic with a storyline that I'm sure could only happen in India, this tale of a man's journey from soldier and star athlete to rebel/bandit is not typical Bollywood fare. Almost songless, its low-key storytelling, literally. The lead character recounts his tale to a very nervous reporter hoping for a career-making scoop. The absence of Bollywood style melodrama really drew me into this film. It was almost the anti- Mangal Pandey - a movie built around one character, but without hype or exaggeration. From the perspective of my limited knowledge it seemed authentically grounded in its setting, and I enjoyed the dialect used, it reminded me of the Dakhini of another favourite of mine,  Well Done Abba.
The artist formerly known as Irrfan Khan definitely filled this film up. Thanks to all the training he did, he was believable as an athlete, but more importantly he did a very good job of portraying an intelligent man with a very simple world view. He made it very clear that he was an athlete first, and a bandit only because he felt that he had no choice, a fact about which he remained very angry right to the end. The film did not turn him into Robin Hood, but it made his choices understandable and he remained a sympathetic character. From beginning to end it his personal ethics remained the same, even his reluctance to resort to violence. When shown using violence, his pained reluctance and sense of aggrieved necessity was very clear.
I also really enjoyed Mahie Gill as Paan's wife. I'd just seen her playing a very different role in Utt Pataang, and was impressed at how believable she was as both a shallow, slick urbanite and a devoted but still independent village woman. She really loved her husband, but it was a realistic affection, no pati parameshwar syndrome here that I could see. Her skilled performance in  Paan Singh Tomar highlights a problem with the current Bollywood obsession for fair-skinned gori PIOs - Angela Jackson, Evelyn Sharma et al could easily play the role that Mahie Gill played in Utt Pataang, but they would never be able to play the role she played in this film.
The film's end credits, with a list of Indian athletes who were forgotten and died penniless, was a very effective way to drive home the message of Paan Singh's lifestory. If anything, in today's world where MS Dhoni can earn more than $20 million US annually, the point may be even more relevant - other sports and their participants have to fight for  scraps, and outstanding achievers in minority sports can still be unsung and underpaid heroes in their own land.
I would recommend this film to anyone who thinks "Indian cinema=Bollywood". Distinctly and distinctively Indian, it's also very accessible to people not used to the style of cinema associated with Bollywood. A good story, well told and convincingly portrayed. I hope that, unlike its title character, this film gets the long-lasting recognition it deserves.
Posted by Unknown at 22:08