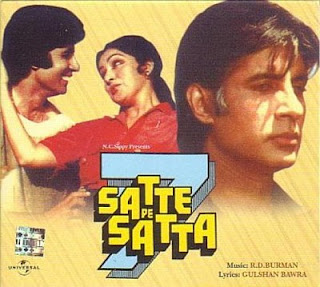 I can't remember who recommended this film to me, or in what context. I know it that it was an Internet friend, and to whomever it was, thank you!
A great fun comic adaptation of  Seven Brides for Seven Brothers this film struck me with its innocence. There is a jaded, and guarded, self-awareness of most mainstream Hindi films these days that can be refreshingly honest, but at times it's just tiresome, labouring under the same misapprehension as the creative (and I use that word very loosely) team behind Family Guy, that endless unoriginal pastiches and parodies can be mistaken for genuine wit and humour. Few films today are made with the sort of naive (and I use that word in its most complimentary sense) simplicity that shone from Satte Pe Satta.
As the picture above shows, Amitabh in a double role, as the hero Ravi and "Satan in human form" Babu, was the headliner for the film. For me, though, Hema was the star.  When Indu quit her job as a nurse to be wife to Ravi and de facto mother to his 6 brothers, I was a bit disappointed, but the trademark spunk and vivacity I associate with Hema still shone through. Her great chemistry with Amitabh and comic timing made her role a delight to watch, as she domesticated the family she'd inherited and trained them in the ways of the world, as in this song:

The songs in this film wsere more proof of its innocent charm. The noxious Western stereotype of Bollywood as being all about song and dance would mock the way songs are jammed into this film, but they all felt right to me. No showy sets with whory goris or emaciated NRI models, the songs in this film belonged to the story. They were devoid of any of the snide "we're doing this ironically, of course" attitude that taints many modern songs, which often seem to be there simply because somebody said there must be songs. The other thing I enjoyed about the songs were the multiple singers used. Listening to Pyaar Hume Kis Mod Pe Le Aaya the different singers made it easier to believe that all 7 brothers were singing, and I love the song for its affectionate display of the bond between the brothers.
It's easy to imagine that everyone who went to see this at their local cinema in 1982 did so knowing what they were going to get in terms of the plot development. While such predictability can be boring, being able to work out in advance what happens and how can free up the viewers to sit back and let themselves be entertained. For me and mere sapnon ki rani, Satte Pe Saat was just that, a relaxing, entertaining trip back to a simpler time in Hindi cinema. Did I mention that Hema totally rocks and that poor Gabbar Singh continues his unlucky relationship with other people's feet?