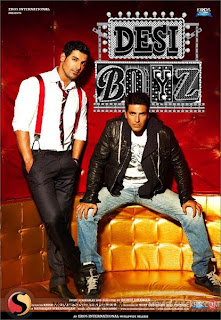 From "to thine own self be true", to "trust your instincts", English has generated plenty of aphorisms designed to warn us that we know ourselves best and should heed our own advice in many matters. Watching Desi Boyz was a salutary lesson for me in the painful consequences of ignoring all those clichéd axioms. Everything about it said that I would not enjoy it, the always funny Vigil Idiot savaged it with particular ruthlessness, yet still I went ahead and watched it. Why? I'm still asking myself the same question.

The main reason I overrode the legion of voices in my head screaming at me to avoid it (they all laughed wickedly when proved right) was Chitrangada Singh. She is a very attractive woman, but I first saw her in Sorry Bhai, liked her performance in it, and was intrigued by her story as an actress returning to the spotlight after marriage and a child, which was still newsworthy when she did it, before Lolo's return. I hoped that her parts of the film at least might be worth watching. I was so very, very wrong. There is a place for films that are just big dumb fun , but this film only scored one out of three, and to paraphrase Meat Loaf, that IS bad.

If I was pressed to sum up this film in one word, it would be tawdry. I think of it as a movie that aims for sleazy but doesn't quite make it, tries for vulgar but falls flat at crass. Perhaps most important of all, it was painfully unfunny. Vigil Idiot skewers every film they review, but I enjoy seeing films I liked getting the treatment, because I can acknowledge the points made while knowing there were redeeming features (at least for me) that let me enjoy the film. This is particularly relevant when it comes to plotholes. I can like a film with more than a few of them, if there are things about the film that compensate for them.  Sadly, there were no such compensations in this painfully awful, insultingly stupid, film.

Actually, that's not entirely true. There were two bright spots  in this ugly morass for me. One was the soundtrack. I discovered that I quite liked the songs, finding them pleasant to listen to and moderately catchy. They were quite easy to enjoy, as long as I only listened to them and did not watch their picturisations, which were as bad as the rest of the film. The other highlight came at the very end, the outtakes played during the credits. I actually laughed, something I hadn't done for the entire two hours of the movie. It looks like the cast may have had real fun making the film, which at least slightly made up for my having none at all watching it.