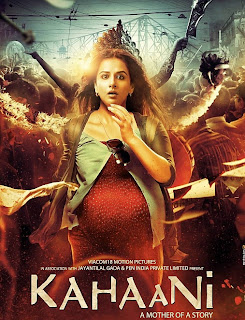 A week may be a long time in politics, but a hundred days is an even longer time in the world of Hindi cinema. That's about how long  after its release I finally got see Kahaani. The downside of that delay was missing out on all the discussion about the film while it was current, having to strictly avoid all reviews for fear of spoilers. The upside was the objectivity that was possible in watching it well after the hype and buzz had worn off.
Kahaani was a  good film, one I enjoyed greatly, and could easily watch again. Was it the quantum leap forward in filmi thrillers that it was widely described as? I don't know, but if it was, that says more about the dire state of other filmi thrillers than it does about this one.
Right from the start, it had a familiar, comfortable feeling. I knew there was a surprise of some sort coming, and the biggest part of that surprise took perhaps a femtosecond to work out. I don't really blame Kahaani for this, I blame my own familiarity with similar ruses in other, Western films. Therein lies the film's weakness and its strength for me.
The weakness lay in just how obvious the most visible part of the surprise was. I did not work out the entire story before the climax, but I recognised the elements of Western thrillers that had been blended into this film, and that enabled me to know one important thing about the lead character for certain. Familiarity did not breed contempt, but it did kill the chance of "wow, I didn't see that coming!"
That same Western style of storytelling, though was also part of the film's great strength. Many, many Indian films rip off Western films, and do so with excruciating ineptness. Some pad out a Western film's story with too many songs and self-indulgent lack of editing, creating unpalatable slop that does neither cinema justice. A precious few merge a Western genre with an Indian milieu and sensibility and get it just right. For me, Kahaani is right near the top of the list of that elite group. Director Sujoy Ghosh said that he wanted Kolkata to be a star of the film, and he succeeded magnificently, I thought. The authenic feel of the film, the sense of being there and the feeling that the city herself was a major character was a big part of what kept me interested, even when the story was unremarkable. Atmospheric is perhaps a clichéd term, but it fits so much of this film, especially the climactic final scenes, making good use of the crowds and colours of Kolkata's Durga Puja to make that iconic Bengali tradition an integral player in the story. Making the film a tribute to his hometown definitely added a personal warmth to the viewing experience.
If Kolkata was a star of the film, Vidya was the star, without a doubt. The promotional posters made it clear that this was her film, and she owned it. Her performance was so good that I was invested in seeing how the story developed for more opportunities to watch an expert ply her trade, rather than focusing on her non-secret. She is the complete package for sure, brains and beauty. That clear intelligence and captivating beauty power  a melting smile that is  irresistible. There were plenty of scenes where her beauty and guile made the story's developments plausible.
The one at whom Bidya's magnetic charm and intelligence was mostly directed also deserves special mention. Parambrata Chattopadhyay played his "double agent" role really well. The relationship between his character and Vidya's was deftly handled, a nice blend of restraint and implication, with volumes left not only unspoken but only very subtly hinted at. A tribute to the actors and the director, I thought.
The other standout role and performance for me was Saswata Chatterjee as Bob Biswas. Some might argue that it's not much of a stretch to see an insurance salesman as a detached psychopathic killer, that there's a Bob Biswas in almost all of them, but I think it's a scary tribute to his performance that I was reminded of Anders Breivik.
The weak link in the key cast was Khan, the IB agent. I say Khan, because I see the flaw as being the character, not the actor. Nawazuddin Siddiqui has received praise for his performance, but I found the character he played extremely problematic. Up until almost the end, he's a bombastic bully, with all the finesse and subtletly of an avalanche, and I can't see how such a character could rise so high in the world of intelligence and covert operations. There's nothing remotely covert about commandeering a police station by means of a profanity-laden outburst at its commanding officer.
That was the only real flaw in the film, from my point of view. Some have said that the thriller element was weak and too easily ascertained. but I thought it was competent and serviceable. Perhaps that's just because the one major assumption I'd made about the film turned out to be wrong, too obvious after all. The strong characterisation and excellent performances made the film interesting and involving even if the structure seemed a little  familiar. And the film could definitely be used as a model to explain the unfamiliar concept of editing to may filmi directors. A very good film, perhaps not a great one, but one that makes me want to see more of everyone involved in it. One of the main cast has already appeared in a film directed by my filmi favourite, Nandita Das. Now more than ever  I want to see her direct a Vidya Balan starrer. That way, my cause of death could officially be listed as, filmi bliss overload. What a kahaani that would be!
Posted by Unknown at 22:28